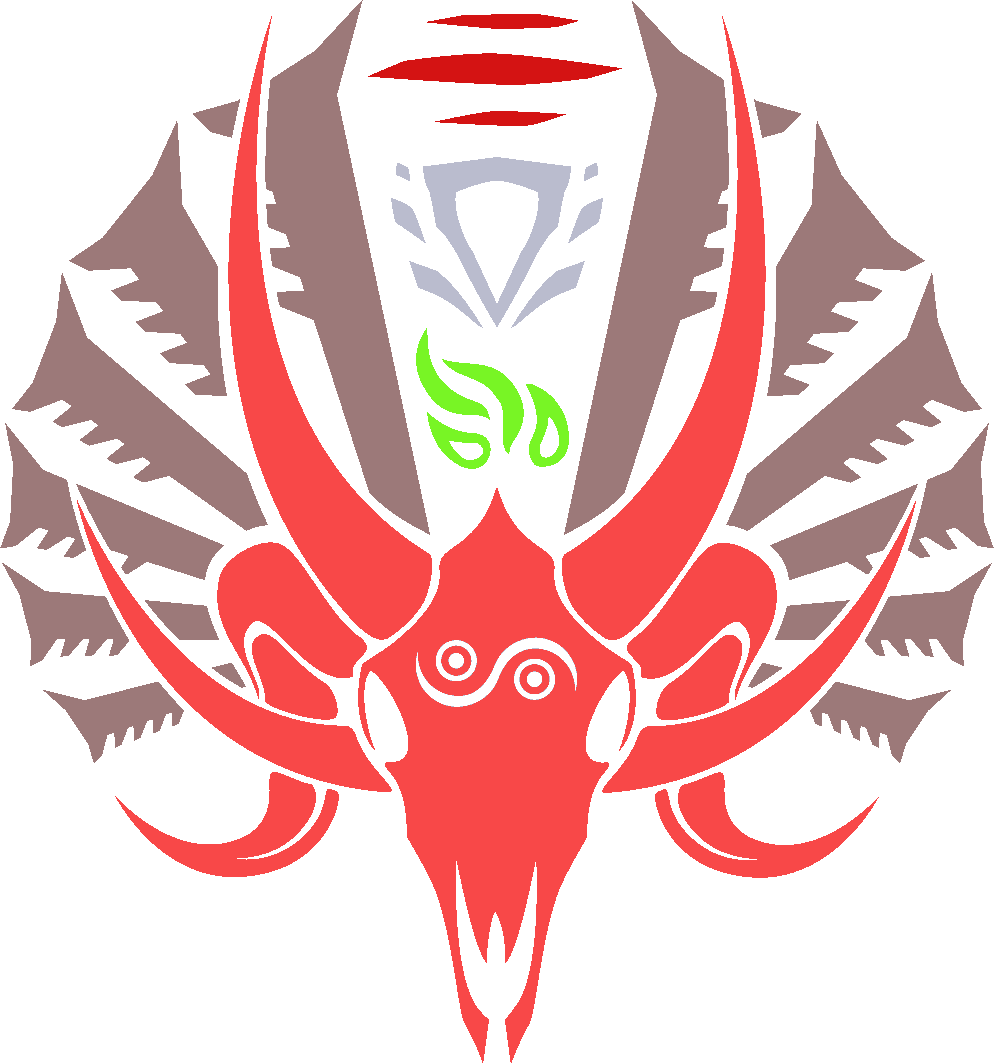 Vilomaxus Cruentu Quodpipax (the Order of Unquenchable Bloodthirst in cultist) is a Plague clan located in the inner Rotrock Rim, formerly consisting of two factions: the Cultists and the Straggons.

The Cultists are worshippers of the Plaguebringer, whom they refer to as Involonax Thaesux, or Icon of Decay. They perform various rituals, aiming to strengthen themselves and hoping to appease the Involonax Thaesux herself. Their occupations are varied, although a considerable amount of them are priests and blood mages.

The Straggons are a remnant of a hivemind army of cyborgs. Formerly mindless slaves to the Straggon Nexus, they have since regained full control and individual identity and now serve the clan on their own accord. While the Straggons are no longer a separate faction, the term itself is still used to refer to cyborg members of the clan.

The current leader of the clan – sixth leader in history – is Demontius the Blessed.

The clan insignia consists of a stylized dreadram skull with a Plague rune on its forehead, the cleaver-wings of the old Straggon mirror emblem, and the runes for the sub-elements blood, metal, and venom. The insignia is commonly drawn in blood or, when carved, dusted with cerdae shed or enchanted to glow red.

The clan resides in a grotesque fortress, named the Pretiacruento "blood heaven", rising toward the putrid skies of the Rotrock Rim’s inner circle. The imposing building used to be a temple, built long before the Straggon-Cultist war by the servants of Nythrel the Conqueror; it was later reinforced and turned into a citadel during the war.

The fortress stands in the center of the clan’s territory, which spans about a mile of land. The clan does not take kindly to intruders, and so the territory is guarded by several packs of tamed nochnyrs and infestation hounds. The outskirts of the territory are marked with numerous warning signs consisting of various threatening messages in cultist, scrawled on bonewood slabs with blood.

The citadel itself is built mostly from stone and overgrown by Rotrock plant life, fleshy roots creeping into every crack and crevice. The base of the structure is roughly square-shaped, with a tower at each corner. A massive, lumbering malevolent spirit guards the entrance. The entrance gate, large enough for an imperial to pass through, is made of solid bonewood held together by thick, rusty rods of metal, and adorned with an intricate carving of the new clan insignia, along with the runes for blood, metal, and venom. The remnants of dried blood indicate that the old clan insignia had been merely painted onto the gate.

A variety of rooms is nestled within the walls of the fortress. Most of them are lit by candles, but bottles of cerdae shed, glowing tails, vials of radgoop, and various other light sources are also used, depending on the intended mood of the room.

The northwestern section contains the clan quarters, where the members live and sleep. Most members are comfortable sleeping in the main room, but those who prefer privacy can find it in dedicated sleeping chambers. The section’s tower contains the clan’s food stores.

The northeastern section houses the nesting grounds, where Shial the Mother slumbers, guarding and incubating the clan’s spawn. The nesting room is overgrown by a living, twitching mass of flesh, providing the required heat and humidity to the eggs. The tower of this section is unused, its doors barred by a thick layer of flesh.

In the southwestern section lies the vault, containing all of the clan’s valuables. Treasure, gems, weapons, bones, and individual members’ prized possessions are stored here for later use. Both the entrance and the inside are heavily guarded. This section’s tower is used as a dungeon, holding prisoners until the Ritual of Conversion.

The southeastern section is home to machinery, notably the straggonificator reclaimed from the late Makron’s ownership, as well as the newly built converter. The core chamber, formerly containing the now-retired Straggon Nexus, now houses the converter. The straggonificator resides to the north of the core chamber, and the neurachem manufacturing systems – former stroylent processing systems – are housed to the west. A neurachem containment vat is located in the section’s tower.

At the heart of the citadel, well protected from the outside world, the former temple stands, now a sacrificial chamber. Its walls are adorned with the bones of dragons who have fallen on the journey to the Rotrock Rim. In the center of the chamber lies a bubbling pit of impure radgoop, imbued with a single drop of Wyrmwound ooze. It is here that the clan’s rituals are performed, and where the skulls of the deceased leaders – Nythrel, Anashril, Wrack, and Krutost – reside, engraved with runes, overlooking the room with softly glowing eyes. A library lies to the south of the chamber, holding all of the clan’s history and knowledge in the form of various scrolls, books, and tablets. The east side of the chamber houses the warp portal, installed by the allied Nexus-Morphix Enterprise.

Most members of Vilomaxus Cruentu are able to speak traditional draconic, but among themselves they use a language called the Domus Durbentia "Dark Wisdom", known as cultist to outsiders. It is a harsh, hostile-sounding language, perceived by its speakers as blessed and holy, meant to frighten outsiders and keep the clan’s secrets. The language has two forms: formal, used in rituals and chants, and colloquial, used in everyday talk.

Formerly, the clan leader was required to wear an antlered bone crown and a skull mask, but the tradition has since been discontinued. Regular bone crowns were also used to indicate a high position in the clan, but since Krutost’s leadership, they are no longer required or restricted to high positions, and clan members can wear whatever they please.

A number of rituals is commonly performed, most notably the Rituals of Praise, Acceptance, and Conversion. The Ritual of Praise is a simple one: a chant is sung, a beast or dragon is sacrificed to the Involonax Thaesux, and its blood is consumed. The denizens of Vilomaxus Cruentu believe that by drinking a plagueborn creature’s blood, they gain its life force and become stronger.

If a dragon wants to join the clan, a test of the dragon’s allegiance to the Plague element is required: the Ritual of Acceptance. In this ritual, the dragon is momentarily suspended into the ooze pit. The effects vary from dragon to dragon; some undergo extreme mutation and die immediately, some survive the mutations but die of later complications, some mutate and survive indefinitely, and in rare cases, some crawl out wholly unaffected. Those who survive are considered worthy of joining, and accepted into the clan. Those who perish are drained of blood in a Ritual of Praise, their meat is consumed, and their bones are cleaned and repurposed for decoration and utility.

Lastly, the Ritual of Conversion is performed on captives and war prisoners, especially those who refused to join the clan. It is similar to a Ritual of Accepting, but before the subject’s submersion into the pit, they are given a shot of neurachem, rewiring their mind. Survivors of the ooze pit test are then sent to the converter, where they are outfitted with a neurachem distribution system to maintain their new mindset. In the past, as a legacy of the evil Makron’s ways, this ritual was known as the Ritual of Imprisonment, and consisted of converting survivors of the ooze pit test into mindless cyborg Straggon soldiers; the new ritual is still not completely ethical, but it is a necessity for the clan's safety and continued growth.

The majority of clan members classify themselves into four sub-factions, called the Strains: Pestis (Contagion), Cruento (Blood), Thaesux (Decay/Blight) and Marana (Death). The strains work together in harmony, each contributing to the clan in their own way.

tfw this clan is just a big mess of references lol