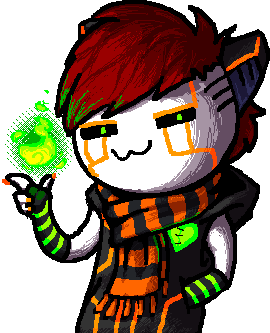 Hello and welcome to the Maltiverse, an epic website and future lore repository that is a big wip, so don't look at it too close or you'll get tangled in the spaghetti code cuz I wrote this thing pretty much from scratch. It probably looks jank on mobile cuz I haven't made it responsive yet (not sure if i ever will).

To the left are some links to my online presence, feel free to check em out.

I'm Mal, a '96-born cybergoth raverlord and sweater cowboy who loves playing boomer shooters, drinking gallons of energy drink, simping over robot villains, and generally existing upon this earth. I'm an artist who studied graphic design for a few years, and I specialize in sketching, pixel art, low-effort MSPaint scribbles, and occasional painting. Aside from visual arts I also like to dabble in music and writing but they're not my primary skill.

I'm a boomshoot addict who grew up on classic Doom and its clones, of which Blood (1997) is probably my favorite. I like a bunch of other things too, read all about it here if you dare.

I'm also a shameless pet site enthusiast and an official artist for Dragon Cave and The Final Outpost, and I make cool robot skins on Flight Rising. I do have accounts on a few other petsites like DV, CS and PFQ but I'm not super active on those.

And in case you haven't noticed yet, I'm a big fan of orange. #F90 to be precise.

The name Malcorium traces back to Malfunction, an old ZDaemon username of mine. Over time, it got shortened to Mal (which I use as a short-form name to this day). I then briefly used the name of a rogue antivirus, MalwareCore, as a username because it started with Mal and I thought it sounded edgy and badass (and the rogue had some hilarious misspellings). MalwareCore got shortened to Malcore, then I randomly added an -ium at the end, turning it into its own thing and removing the scamware connotation, while unintentionally forming corium in the process.